"Who run the world?" by Malin Norman

Two weeks ago I took part in the Great North Run, the world’s biggest half marathon with more than 57,000 runners from 178 countries. The 21k race in Newcastle was my fifth half marathon and by no means the fastest, but one of the most memorable.

Before, during and after the race I met people from all over the world. Men and women, young and old, fit and…less fit. I saw naked bums in the bushes next to the start area (toilet queues were 40 minutes!). I saw a tall Viking kind-of-guy running barefoot and another tough-looking man throwing up at a bus stop after the race, with the girlfriend patiently patting his back. Not to mention all those smiling and cheering faces along the route, and some wet with tears.

This is not only the biggest half marathon in the world but also the most diverse. And what made it greater than other races were all the fantastic people running for charities and dressing up for the cause. Big TV screens told the stories of some of these dedicated runners who took part in memory of loved ones or for other reasons close to their heart. Most memorable for me was a middle-aged man running in front of me, dressed as a saucy bee with striped tights and a tutu.
“We’re in this together,” I kept thinking to myself as I followed the queen bee with the Euro 2016 tune by French DJ David Guetta and Swedish singer Zara Larsson pumping in my headphones. Guetta has written another excellent running tune by the way, Every Chance We Get We Run. He seems to know what he’s talking about.

British distance runner and Olympic champion Mo Farah won for the third time in a row but who cares about that when 56,999 or so others also completed the 21k course? Each and everyone a champion, regardless of nationality, gender or age. For instance Claire Lomas, a woman wearing a bionic suit. Paralysed from the chest down but also suffering from morning sickness due to her pregnancy, she finished the race five days after she started. If she can do it, anyone can. 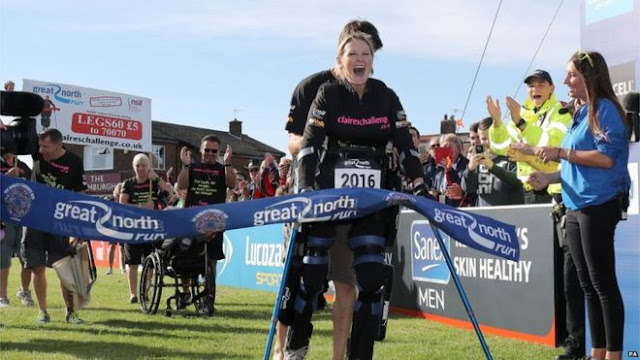 So who run the world? We do. We run for those who can’t, and for those who are no longer with us. And we will keep doing so for as long as we can, and when we can’t run any more the younger and fitter will take over and continue for as long as they can. Because that’s what we do, at every chance we get.